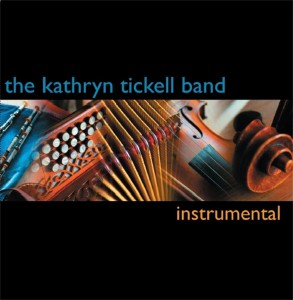 Instrumental is the first Kathryn Tickell Band album since 2004’s ‘Air Dancing’ and represents a major change in approach. Whereas that record was a fairly faithful representation of their live performance, Instrumental has been created with a broader canvas in mind, allowing Kathryn to add a new range of colours and textures to the sound. The four piece are joined in the studio by a range of guest musicians and instruments – Dov Goldberg on clarinet, ex-KTB bassist Joss Clapp, percussionist Donald Hay and Agustin Fernández on charango.

Whatever the additional players, the source material remains rooted in the music of Kathryn’s beloved Northumbria. While the majority of it has been written by the musicians themselves, the melodies are imbued with a sense of tradition that has been passed down through generations. It is the sound of wild, bleak open spaces, the sound of a steeped musical history, the sound of long nights spent with like minded souls. It is the sort of record that Kathryn Tickell has made her own – a joyous, inspired and memorable journey through the music that has become her life.